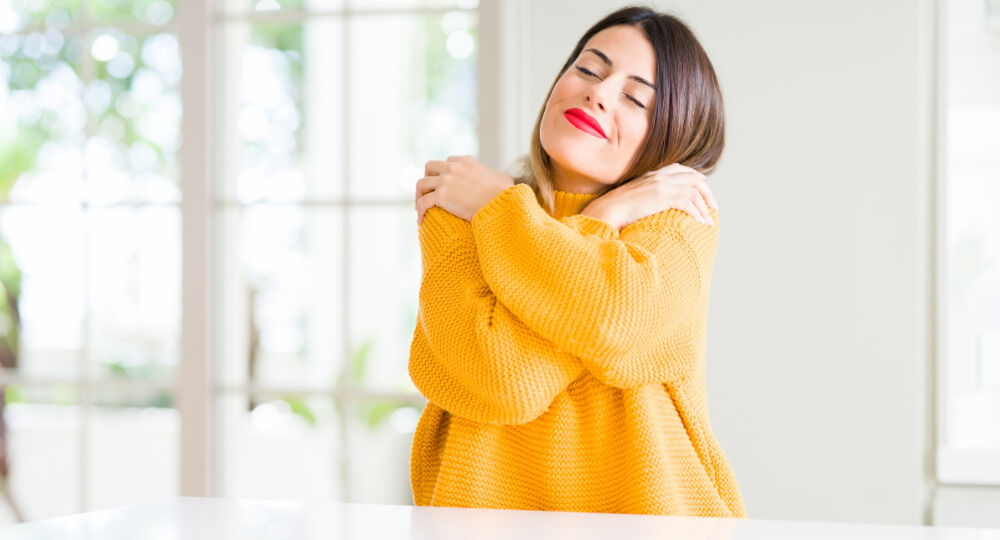 Self-Compassion? I Hardly Know Her.

What’s the first thing that comes to mind when you think of self-compassion? Was it something along the lines of: “Yikes, I haven’t had that in a while,” “It’s hard,” or “I don’t even know what self-compassion is”? You’re not alone.

Self-compassion can seem like a foreign concept to us, especially when we don’t practice it in our everyday lives. We may practice compassion for others, but it’s not exactly the same when it comes to ourselves. Practicing compassion for others may look like: being there for them through rough times, saying kind words of encouragement, or even something as simple as holding the door open for someone. When we practice those acts of compassion, they seem to come naturally. We often feel good about ourselves afterward.

Now what if I told you to do those same things, but for yourself? A sudden rush of apprehension, shame, or guilt may come up. But why would all of those negative emotions surface when you’re just trying to be kind to yourself? Well let’s reflect….

Do you think you deserve the same kindness you show others?

Probably not. That’s the typical response for many of us. But where does that even come from? It could be because we were never taught how to be compassionate toward ourselves. It could also be that we watched others being harsh to themselves and learned “that must be the way to do it.” But what does that do for us in the long run? It teaches us to hate ourselves. That we’re not good enough. That we don’t deserve basic kindness. We literally put ourselves down for trying or bully ourselves so much that we don’t try at all… Aren’t you tired?

If you said “yes,” I’m proud of you. Let’s walk this journey together. If you said “not quite yet,” I respect that and I’ll be here for support if you change your mind. Either way, let’s talk about building self-compassion.

Self-compassion is a skill. In order to gain any skill, it must be practiced continuously to get the hang of it. Now, learning how to be self-compassionate won’t be easy. It’s not a skill where we can physically see areas of improvement or its results, like learning how to hit a ball and eventually scoring a homerun. Self-compassion is an internal skill where we need to be conscious of our thoughts, reactions, and beliefs about ourselves. You may be thinking, “So if I say that I’m stupid, I have to automatically say that I’m a genius?” No, actually.

The first step of building self-compassion is recognizing that you’re beating yourself up. When you tell yourself that you’re stupid, ugly, not good enough, or whatever, job one is to catch yourself doing it in the moment. That’s it. Don’t judge yourself. Just recognize that you’re saying negative things about yourself.

Once you catch yourself doing that, instead of continuing to beat yourself up for having those thoughts, be curious about them. Ask yourself, Where is this coming from? What makes me believe this? Is it 100% true? These little steps can be taken on your own to begin the process, but it may be easier with the support of a counselor. In the end, how you speak to yourself matters: thoughts are simply words and images that we give meaning and power to. Let’s take back your power!

Now, a common trend is to say a positive statement to counteract the negative one. Has that ever really worked out? Probably not. It may even make you feel worse and send you into a spiral of self-hate. That’s because you’re trying to jump from one extreme to the other. If we’re imagining a continuum where positivity is on one end and negativity is on the other end, what’s in the middle? Neutrality.

Neutrality is the stepping stone between negative and positive. It’s neither good nor bad. It just is. So let’s go back to our earlier example. You might have the thought: “I’m stupid.” Instead of trying to jump to the positive end, what’s a neutral statement that we can say? There’s plenty. A couple that immediately come to mind are: “I’m learning.” “I was unprepared this time and will try again with more experience.” “It takes practice.” “I’m not expected to know everything.”

What do all of those statements have in common (besides being neutral)? They’re recognizing the reality of the situation. That’s what self-compassion is all about. Meeting yourself where you are in the present moment.

That’s especially hard when we have expectations for ourselves. But are they really your expectations? Some of them may be, but many are expectations that we’ve learned from others.

Let’s imagine that you were brought into this world as a blank sheet of paper. As a child you’re going to let everyone and anyone write on that sheet of paper for you. Their beliefs, thoughts about you, and expectations for you. You can’t help it when you don’t know how to read and write. You just listen and follow what everyone else is doing. Now as an adult, you still hold onto that sheet of paper, but you’ve read it so much that you begin to believe that what’s on it actually came from you. But did it? Those things were written on your sheet of paper when you were a child, an entirely different person than who you are as an adult. You’re still holding yourself to those standards and expectations without recognizing the reality that that is not who you are anymore. You have gained the experiences, the voice, and the ability to do what you want whenever you want, and you don’t owe an explanation to anyone. But don’t you feel like you owe it to yourself to rewrite your own beliefs, thoughts, and expectations on your own sheet of paper?

Another part of building self-compassion is exploring where beliefs, thoughts, and expectations come from. Understanding the origin of them may help you gain clarity that they were not actually yours, but someone else’s that you’ve held on to for this long. Some shame and guilt may arise from this. So, I encourage you to speak with a counselor to make the process a bit smoother. Recognizing all of this may seem overwhelming for you to take on by yourself, and you deserve the support and compassion of a trained and compassionate therapist on your journey toward self-compassion.

Once you understand where your lack of self compassion came from, you’ll be able to consciously decide whether you want to adopt these beliefs as your own, or get rid of them and create something better that you resonate with. This will make recognizing negative statements and replacing them with neutral statements much easier, since they’re not really your own thoughts, beliefs, and expectations.

There are many other tools to help you find self-compassion. In counseling, a trained professional will walk alongside you and guide you on your journey. After getting the hang of self-compassion I hope that you can say “yes” when asked: Do you think you deserve the same kindness you show others?

Educating Your Child or Teen about OCD